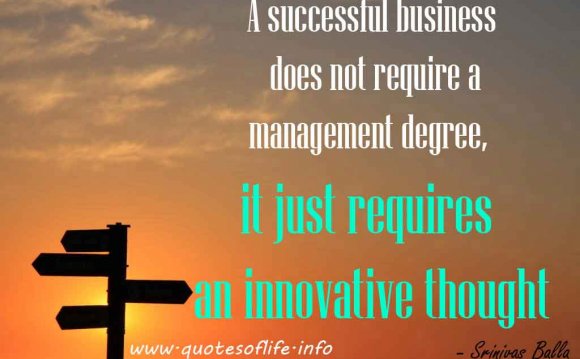 ON ONE level innovation is easily described. The dictionary defines it simply as the act of introducing something new. But business has a more complicated relationship with it. Most firms would claim to see innovation as an opportunity. Many reputations have been won on a single great idea and all will invest in it to some degree. But for the complacent, or the unlucky, it can be the lone sniper’s bullet that brings down a mighty corporation. “Out there in some garage is an entrepreneur who’s forging a bullet with your company’s name on it, ” said Gary Hamel, a management guru.

As the quotes below demonstrate, there are many theories about successful innovation. Is necessity the mother of invention or, as Marshall McLuhan would have us believe, is it the other way around? Should it be a scattergun process, carried out in the hope that some bullets will find a target, or a tightly defined endeavour? Some claim that innovation is easier at small, more nimble companies than at behemoths. But firms such as Apple or Johnson & Johnson might argue.

Finally, it is worth emphasising that innovation matters to more than just shareholders or venture capitalists. Another guru, Peter Drucker (pictured), defined it as “the act that endows resources with a new capacity to create wealth.” At its broadest level it allows the economy to grow and thus has the ability to improve the quality of life for everyone.

“Many great ideas have been lost because the people who had them could not stand being laughed at.”
Anon

“Don’t worry about people stealing an idea. If it’s original, you will have to ram it down their throats.”
Howard Aiken, computer scientist, quoted in Portraits in Silicon by Robert Slater (1989)

“If you think of [opportunity] in terms of the Gold Rush, then you’d be pretty depressed right now because the last nugget of gold would be gone. But the good thing is, with innovation, there isn’t a last nugget. Every new thing creates two new questions and two new opportunities.”
Jeff Bezos, founder of Amazon (1964–)

“Do you realise if it weren’t for Edison we’d be watching TV by candlelight?”
Al Boliska, radio presenter (1942–72)

“It’s important not to overstate the benefits of ideas. Quite frankly, I know it’s kind of a romantic notion that you’re just going to have this one brilliant idea and then everything is going to be great. But the fact is that coming up with an idea is the least important part of creating something great. It has to be the right idea and have good taste, but the execution and delivery are what’s key.”
Sergey Brin, founder of Google (1973–)

“Poor old Spotty Muldoon. He thought of splitting the atom the other day. If only he could have had the idea about 30 years ago, he’d have made a bloody fortune.”
Peter Cook, satirist (1937–95), E.L. Wisty, character in The Man Who Invented the Wheel (1964)

“A surprising number of innovations fail not because of some fatal technological flaw or because the market isn’t ready. They fail because responsibility to build these businesses is given to managers or organisations whose capabilities aren’t up to the task…Most often the very skills that propel an organisation to succeed in sustaining circumstances systematically bungle the best ideas for disruptive growth. An organisation’s capabilities become its disabilities when disruptive innovation is afoot.”
Clayton Christensen, academic (1952–), The Innovator’s Dilemma (1997)

“Innovation is the specific instrument of entrepreneurship. The act that endows resources with a new capacity to create wealth.”
Peter Drucker, management writer (1909–2005), Innovation and Entrepreneurship (1985)

“Many people still believe a better mousetrap is all it takes. But of the 2000+ mousetraps patented, only two have sold well, and they were both designed in the 19th century. A good idea doesn’t sell itself although most ‘lone inventors’ make the mistake of thinking it will.”
Andrew Hargadon, academic, How Breakthroughs Happen: The Surprising Truth About How Companies Innovate (2003)

“If it’s a good idea, go ahead and do it. It is much easier to apologise than it is to get permission.”
Grace Hopper, computer scientist (1906–92)

“The world is moving so fast these days that the man who says it can’t be done is generally interrupted by someone doing it.”
Elbert Hubbard, philosopher (1856–1915)

“Innovation comes from people meeting up in the hallways or calling each other at 10.30 at night with a new idea, or because they realised something that shoots holes in how we’ve been thinking about a problem. It’s ad hoc meetings of six people called by someone who thinks he has figured out the coolest new thing ever and who wants to know what other people think of his idea. And it comes from saying no to 1, 000 things to make sure we don’t get on the wrong track or try to do too much. We’re always thinking about new markets we could enter, but it’s only by saying no that you can concentrate on the things that are really important.”
Steve Jobs, founder of Apple (1955–2011), quoted in BusinessWeek, May 1998

“Invention is the mother of necessities.”
Marshall McLuhan, “The Argument: Causality in the Electric World”, Technology and Culture: Symposium 14 (1), January 1973

“In big industry new ideas are invited to rear their heads so they can be clobbered at once. The idea department of a big firm is a sort of lab for isolating dangerous viruses.”