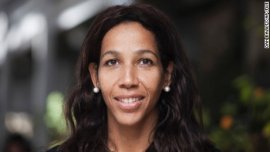 But the hardest truth came to her years later on a warm August day in Hamburg when she walked into the central library and picked up a red book with a black-and-white picture of a woman on the cover. It was titled "I Have to Love My Father, Don't I?"

As Teege, then 38, flipped through the pages, she felt she'd been caught in a furious storm that had suddenly come from nowhere.

She had unearthed the ghastly family secret.

She looked at the names of people and places in the book and realized that the woman on the cover was her biological mother.

And the father in the title was none other than Amon Goeth, the sadistic Nazi who was commandant of the Plaszow concentration camp in Poland. Many came to know about Amon Goeth through Ralph Fiennes' portrayal of him in the 1993 movie "Schindler's List."

Teege doesn't know why she was drawn to the book. But on that day, Teege learned that she - a black German woman who'd gone to college in Israel and befriended the descendants of Holocaust survivors, who now had a successful career and a loving family - was the granddaughter of a monster.

It was a moment that cut her life in two. There was the "before, " when she knew nothing of her family's sinister past, and "after, " when she was forced to live with that truth.

In the library, Teege grew cold knowing she was connected by blood to a man responsible for the deaths of 8, 000 Jews. She checked out her mother's book, lay down on a bench outside and called her husband to come fetch her.

Teege had battled depression all her life and had wondered what was behind her sadness. In fact, she'd gone to the library that day for psychological research.

"I always had this inner feeling that something was wrong, " she says, likening it to being inside a house with many locked doors. "I didn't know what was behind them."

She looked in the mirror at herself, saw Amon Goeth's chin, the same lines between the nose and mouth, and thought: "Do I carry something of him in me?"

After the initial jolt eased, she embarked on a quest to know everything. Eventually, she wrote a book of her own: "My Grandfather Would Have Shot Me: A Black Woman Discovers her Family's Nazi Past."

She feels fairly certain that her grandfather would not have hesitated to kill her. She is, after all, far from the Aryan ideal espoused by Amon Goeth, who, according to Teege's book, went to the gallows saying, "Heil Hitler."

"It's a story you can't take to your grave. It's exceptional, " Teege says on a recent January day at Atlanta's Emory University, where she spoke about her identity and her journey to reconcile with it.

She has left her job in advertising and made her personal history her life's work now. She speaks about how she progressed from her initial fear and guilt to acceptance of her history and knowledge that she is a very different person than her grandfather.

"Today, I am not afraid of him, " she says. "We are two very different people."

And she talks about how, for a long time before her discovery, she didn't believe in fate, only in chance. But now she thinks differently. She thinks about the choices she made that took her to Israel and led her to her mother's book. She believes she made them for a reason.

Some things in life, she says, are predetermined.

Living with the dead

Teege's case was exceptional, thought Peter Bruendl, a Munich psychoanalyst who has treated her and other grandchildren of Nazis.