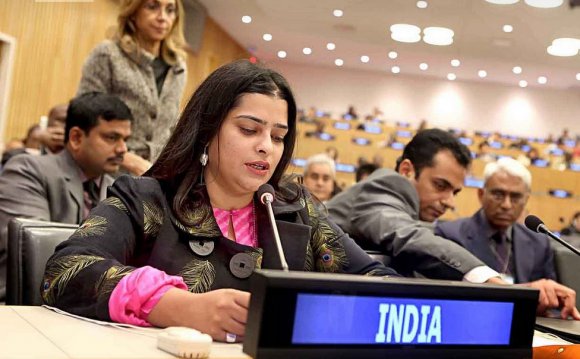 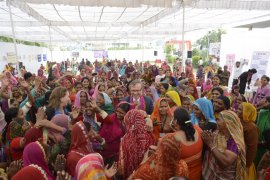 The reservation of 50% of the seats for women for local assemblies in Rajasthan has led to a new generation of local female leaders. The Hunger Project has been working to train these women to become effective leaders in their communities.

In a two-day Elected Women Representatives’ meeting organized by The Hunger Project on December 1st – 2nd in Jaipur, more than 255 elected women leaders from across six districts came together at the state capital. The group represented women who fought against caste, social and gender barriers in order to improve the living conditions in their communities.

The Hunger Project works in seven Indian states to strengthen the leadership capacities of elected women leaders in village Panchayats. The project trains and encourages women at the village level to practice good governance and effectively address issues of social and gender justice using the local governance framework.

In Rajasthan, The Hunger Project currently works with over 1800 elected women representatives who have started making their presence felt by redefining the local development agenda in the state.

The majority of the women at the convention were elected in January 2015 as Sarpanch–village president–and ward members. This past year, the state government Panchayat elections introduced a new ordinance specifying educational qualifications for persons contesting elections; as a result, the election saw a new group of inexperienced young women contesting elections who previously couldn’t because of their education. The Hunger Project’s training has supported the empowerment of women leaders as young as 21 years old.

The convention sought to inspire these newly elected women representatives who have already taken steps to proactively address the local development issues such as preventing early child marriage, stopping open defecation, education, health and addressing violence against women by using the local governance framework. It was an opportunity for elected leaders to learn and share from each other’s experiences and jointly address pertinent issues concerning their communities.

Roopali Devi, a ward member from Sirohi district, was determined to stop open defecation. “I have got toilets constructed in my village, however now the challenge is to get people to use those toilets as they lie unused. I have already started having small meetings in my village where I discuss the importance of maintaining personal hygiene, so that community members start understanding the importance of clean environment, ” she said.

The convention was also an opportunity for the elected members to learn from the experience of other women. Reshma Bano, a twenty-one-year-old ward Panch from Shabad village recalled that she was first ignored by everyone once she was elected as a Panch due to her young age. However, through her dedication to raise awareness about hygiene, she gained the respect she deserved.

By participating in the conventions and training workshops, the women were able to build confidence to carry out their work, and discussed issues that are important to them and the communities in which they serve.

The Norwegian Embassy, which has supported and funded this successful training module of women leaders since 2006, attended the event. The convention gave the opportunity to share experiences, learn from one another, create their five-year plans, in addition to interacting with the media and government officials.

Mr. Nils Ragnar Kamsvåg, Ambassador of Norway to India, was the Guest of Honor at the convention. He declared that a country cannot make progress if half its people are left behind, and that women are the change makers of society.