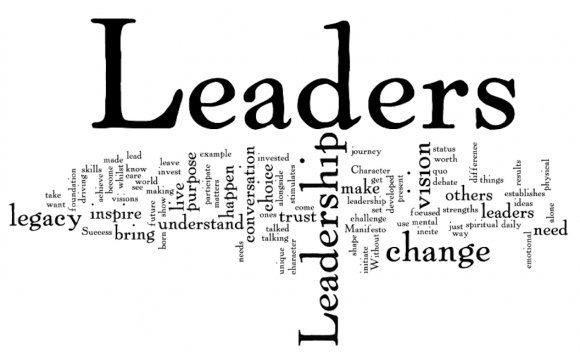 Americans believe women have the right stuff to be political leaders. When it comes to honesty, intelligence and a handful of other character traits they value highly in leaders, the public rates women superior to men, according to a new nationwide Pew Research Center Social and Demographic Trends survey. 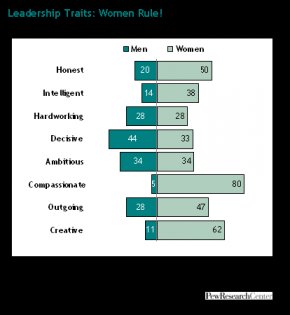 Nevertheless, a mere 6% of respondents in this survey of 2, 250 adults say that, overall, women make better political leaders than men. About one-in-five (21%) say men make the better leaders, while the vast majority — 69% — say men and women make equally good leaders.

The paradox embedded in these survey findings is part of a wider paradox in modern society on the subject of gender and leadership. In an era when women have made sweeping strides in educational attainment and workforce participation, relatively few have made the journey all the way to the highest levels of political or corporate leadership.

Why not? In the survey, the public cites gender discrimination, resistance to change, and a self-serving “old boys club” as reasons for the relative scarcity of women at the top. In somewhat smaller numbers, respondents also say that women’s family responsibilities and their shortage of experience hold them back from the upper ranks of politics and business.

What the public does not say is that women inherently lack what it takes to be leaders. To the contrary, on seven of eight leadership traits measured in this survey, the public rates women either better than or equal to men.

For example, half of all adults say women are more honest than men, while just one-in-five say men are more honest (the rest say they don’t know or volunteer the opinion that there’s no difference between the sexes on this trait). And honesty, according to respondents, is the most important to leadership of any of the traits measured in the survey.

The next most important leadership trait, in the public’s view, is intelligence. Here again, women outperform men: 38% of respondents say women are smarter than men, while just 14% say men are smarter, and the remainder say there’s no difference between the sexes.

Men and women tie on two of the next three traits on the public’s ranking of leadership qualities measured in this survey — hard work and ambition. Men prevail over women on decisiveness (their lone “victory” in the battery of eight traits), with 44% of respondents saying that men are more decisive and 33% saying women are.

Finally, women have big leads over men on the last three traits on the public’s rankings of the eight items measured: being compassionate (80% say women; 5% say men); being outgoing (47% say women; 28% say men) and being creative (62% say women; 11% say men).

For anyone keeping score, that’s women over men by five to one, with two ties, on eight traits, each of which at least two-thirds of the public says is very important or absolutely essential to leadership. Notably, nearly all of these gender evaluations are shared by men as well as women, though the margins are more heavily pro-woman among female respondents than among male respondents.

The survey also asked respondents to assess whether men or women in public office are better at handling a range of policy matters and job performance challenges. On the policy front, women are widely judged to be better than men at dealing with social issues such as health care and education, while men have a big edge over women in the public’s perception of the way they deal with crime, public safety, defense and national security.

As for job performance skills, women get higher marks than men in all of the measures tested: standing up for one’s principles in the face of political pressure; being able to work out compromises; keeping government honest; and representing the interests of “people like you.”

Overall, however, women emerge from this survey a bit like a sports team that racks up better statistics but still loses the game — witness the tiny 6% sliver of the public that says women generally make better political leaders than men.

To be sure, the fact that such a large majority of respondents (69%) say that women and men make equally good political leaders is itself a measure of the profound changes in women’s role in society that have taken place over the past several decades.

Women make up 57% of all college students, about half of all law and medical school students, and more than four-in-ten students who earn masters degrees in business. They make up 46% of the total private sector workforce and 38% of all managers.

However, it’s still lonely for women at the very highest rungs of the corporate and political ladder. Women are just 2% of the CEOs of the nation’s Fortune 500 companies. In the political realm, they make up just 17% of all members of the U.S. House of Representatives; 16% of all U.S. senators; 16% of all governors; and 24% of all state legislators. Internationally, the U.S.ranks in the middle range — 85th in the world — in its share of women in the lower house of its national legislative body.

Next in the pecking order of explanations is the time pressure that comes with trying to balance work and family; 27% of the public cites this as a major reason there aren’t more women leaders in politics. Some 26% say that a big reason is that women don’t have the experience required for higher office. The least common explanations — chosen as a major reason by just 16% and 14% of respondents, respectively — are that women don’t make as good leaders as men and that women aren’t tough enough for politics.

An Experiment to Test for Hidden Gender Bias

It’s possible that in a survey of this nature, some respondents with negative or biased attitudes do not report their true feelings because they don’t want to appear out of sync with prevailing social norms.

To test for hidden gender bias, the Pew Research Center did a second survey, this one conducted online with a different methodology, a different set of questions and a different group of respondents.

In this experiment, two separate random samples of more than more than 1, 000 registered voters were asked to read a profile sent to them online of a hypothetical candidate for U.S. Congress in their district. One random sample of 1, 161 respondents read a profile of Ann Clark, described as a lawyer, a churchgoer, a member of the
local Chamber of Commerce, an environmentalist and a member of the same party as the survey respondent. They were then asked to indicate what they liked and didn’t like about her, whether they considered her qualified and whether they were inclined to vote for her. There was no indication that this was a survey about gender or gender bias.