CEO of the company

How much credit does the CEO deserve when a company is performing well? Is success really attributable to a single executive, or are economic and industry trends ultimately responsible? What about the rest of the organization? These questions are part of a rich research tradition that seeks to explain which factors account for a company’s performance. Particular attention is paid to a factor known as the “CEO effect, ” which is the portion of company performance that is associated with who’s in charge.

A forthcoming paper by researchers at the University of Georgia and Penn State suggests that CEOs matter more than ever for U.S. companies, and takes a stab at explaining why. The new paper confirms a pattern discovered by previous research: the CEO effect seems to be increasing over time. In other words, the CEO of a company is a more significant predictor of that company’s performance than at any time since the question has been measured, starting in the mid-twentieth century. Moreover, the authors offer a relatively simple explanation, which is that CEOs simply matter more than they used to. 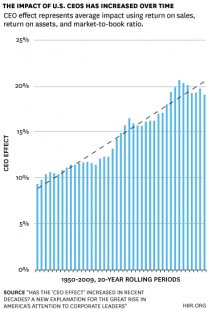 It’s important to note that this research can’t say anything about what makes CEOs important. The researchers tracked when CEOs took the reins at a representative sample of U.S. public companies, and then measured whether different CEOs presided over significantly different levels of performance, even after taking into account industry, firm, and year (which accounts for macroeconomic changes). The chart above shows an increase in the impact of CEOs on an average of three metrics: return on sales, return on assets, and market-to-book ratio.

The increase is undoubtedly interesting, but which is more surprising: that CEOs seem to matter significantly today, or that they mattered so much less in the mid-twentieth century? As the authors write:

In the period 1950-1969, company performance in a given year was due overwhelmingly to factors that were relatively easy to comprehend, notably macro-economic conditions, industry factors, and the firm’s overall health and position. By the period 1990-2009, these straightforward contextual factors were not nearly as predictive of performance.

In the period from 1950 to 1969, for instance, just knowing the industry a company was in predicted 38.7% of differences in performance. By contrast, from 1990 to 2009 industry predicted only 3.7% of the difference. That gap is telling, and the authors see it as evidence that what has changed goes well beyond CEO leadership. A combination of forces — including the shift of emphasis toward maximizing shareholder value and the role of technology in increasing the pace and complexity of business in countless sectors — made business more dynamic and less predictable. It’s against that backdrop that CEOs have been empowered to pursue new strategies and markets, often across the globe. The result has been an increase in CEO impact.

It’s worth noting that other research has found the CEO effect to vary considerably between industries, in somewhat counter-intuitive ways. The more resources a CEO has at his or her disposal to invest, the more their decisions will tend to matter (for good or ill) — that fits broadly with the conclusions drawn in this new research paper. On the other hand, high-growth industries have been shown to be less subject to the CEO effect, because the plethora of opportunities for success make it easier for mediocre executives to succeed. Taken with this new research, this suggests something of a paradox: an increase in business dynamism has amplified the impact of CEOs over time, but that effect is at its highest in companies where industry and economic constraints still limit the firm’s options.

There is one final explanation that the new paper’s authors consider, and that is that markets simply think CEOs matter more, and naively bid their share prices up and down accordingly. They can’t rule this possibility out, and that uncertainty is telling in that it reinforces their most interesting conclusion. American business has become more unpredictable in recent decades. CEOs may in fact matter more as a result, but so too do forces we do not fully understand.