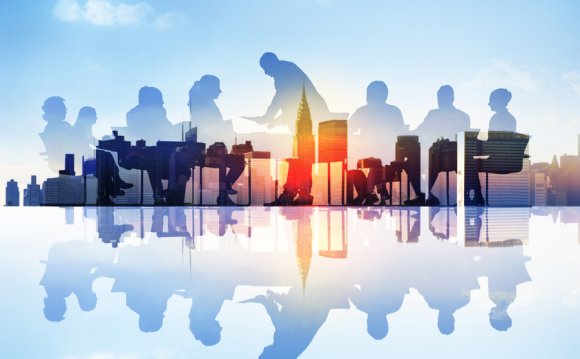 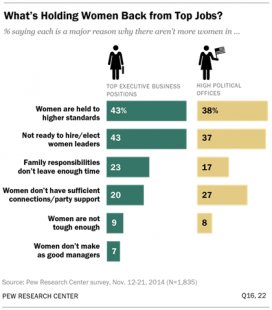 According to the majority of Americans, women are every bit as capable of being good political leaders as men. The same can be said of their ability to dominate the corporate boardroom. And according to a new Pew Research Center survey on women and leadership, most Americans find women indistinguishable from men on key leadership traits such as intelligence and capacity for innovation, with many saying they’re stronger than men in terms of being compassionate and organized leaders.

So why, then, are women in short supply at the top of government and business in the United States? According to the public, at least, it’s not that they lack toughness, management chops or proper skill sets.

It’s also not all about work-life balance. While economic research and previous survey findings have shown that career interruptions related to motherhood may make it harder for women to advance in their careers and compete for top executive jobs, relatively few adults in the new Pew Research survey point to this as a key barrier for women seeking leadership roles. Only about one-in-five say women’s family responsibilities are a major reason there aren’t more females in top leadership positions in business and politics.

Instead, topping the list of reasons, Similar shares say the electorate and corporate America are just not ready to put more women in top leadership positions. 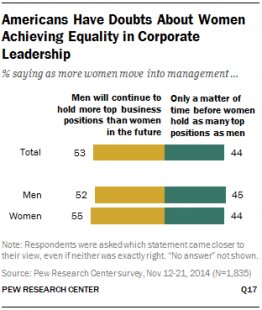 As a result, the public is divided about whether, even in the face of the major advances women have made in the workplace, the imbalance in corporate America will change in the foreseeable future. About half (53%) believe men will continue to hold more top executive positions in business in the future; 44% say it is only a matter of time before as many women are in top executive positions as men. Americans are less doubtful when it comes to politics: 73% expect to see a female president in their lifetime.

These findings are based on a new Pew Research Center survey of 1, 835 randomly selected adults conducted online Nov. 12-21, 2014. The survey also finds that the public is divided over whether a woman with leadership aspirations is better off having children early on in her career (36%) or waiting until she is well established (40%). About one-in-five (22%) say the best option would be to not have children at all.

Getting the Job Done in Politics and Business

When it comes to characteristics that apply specifically to political and business leadership, most Americans don’t distinguish between men and women. But among those who do draw distinctions, women are perceived to have a clear advantage over men in some key areas.

Political compromise has been in short supply in recent years, particularly in Washington, DC. Only 9% say men are better. A narrow majority (55%) say there’s no difference between men and women in this regard. 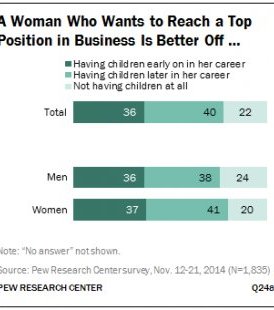 Women are also Women have a somewhat narrower advantage over men when it comes to working to improve the quality of life for Americans and standing up for what they believe in despite political pressure. For both of these characteristics, solid majorities say there is no difference between men and women.

Just as in the political realm, the public does not see major differences between men and women on key business leadership qualities. Where they do see gaps, women have a clear advantage over men on honesty and ethics, providing fair pay and benefits, and offering mentorship to young employees. Men have an edge when it comes to being willing to take risks and negotiating profitable deals.

As the 114th Congress gets underway, a record number of women (104) will be serving in the House and Senate. Today women make up 19% of the Congress, about double the share from 20 years ago. Progress has been slower on the corporate front. Only 26 women are now serving as CEOs of Fortune 500 companies—roughly 5%. In 1995 there were none. Women are slightly better represented in corporate boardrooms than they are at the CEO level. As of 2013, about one-in-six board members of Fortune 500 companies (17%) were women, up from 10% in 1995.

The pipeline for female leaders seems to be widening. Women have made significant gains in educational attainment in recent decades, better positioning themselves not only for career success but also for leadership positions. Since the 1990s, women have outnumbered men in both college enrollment and college completion rates, reversing a trend that lasted through the 1960s and ’70s. And women today are more likely than men to continue their education after college.

Women have also made inroads into managerial positions and professional fields in recent decades. In 2013, over half of managerial and professional occupations in the U.S. (52.2%) were held by women, up from 30.6% in 1968. Even so, women continue to lag far behind men in senior management positions.

Female leadership and the question of power