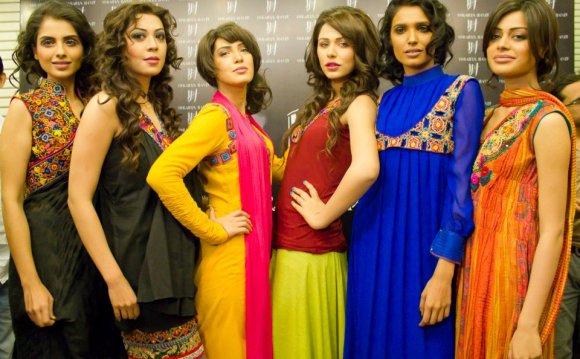 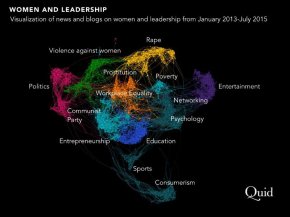 My mother is a supermom. Not only did she work a full-time job, but she also took over my dad’s business when he passed away. During my childhood, she never once commented on the gender specific challenges she faced as a woman in India and opted to promote the notion that leadership is gender-agnostic. Only recently did she confide in me that running a business as a woman did carry with it additional challenges, but that recognizing them would have only made the job even harder. I’ve always wondered if that was cultural (and unique to India) or if women all over the world felt the same way. The best way to analyze that is through a simple data analysis. 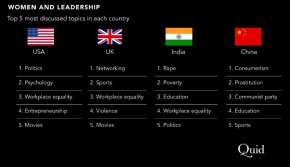 We used Quid to analyze all news and blog posts on “Women and Leadership” from 2013 to date. There were 25 distinct themes that emerged from 2396 articles that we analyzed. The issue of workplace equality stood out as a dominant content theme, representing 7% of the conversation. Specifically, the conversations concerning workplace equality speak to three areas: (a) work compensation, (b) equal rights for promotion and (c) representation in corporations.

Notable differences emerged when we reviewed data looking at the most discussed themes concerning Women and Leadership across the USA, UK, India, and China. 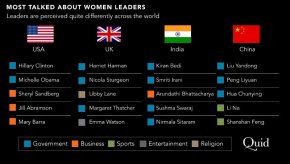 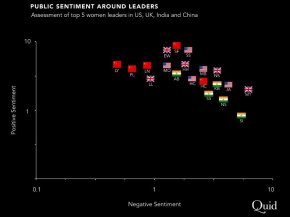 Looking into the most discussed leaders in each of the four countries, we found ourselves surprised to see that no business leaders made the Top-5 in either the UK or China. Instead, China featured two athletes while a religious leader made the list for the UK.

We wanted to dig deeper and understand how these Top-5 leaders were perceived. Based on an analysis of positive and negative sentiments present throughout all articles and blogs written about these leaders, we found that female leaders in China were largely well respected whereas Indian leaders garnered more negative feelings. Even though one might have expected the two sportswomen included in the list in China to have positive sentiments from the public, it was surprising to see the politicians fare just as well. On the other hand, the most prominent female leaders in the US and UK all received fairly balanced results. The one non-government Indian leader didn’t fare as badly when compared to the rest of her cohort.