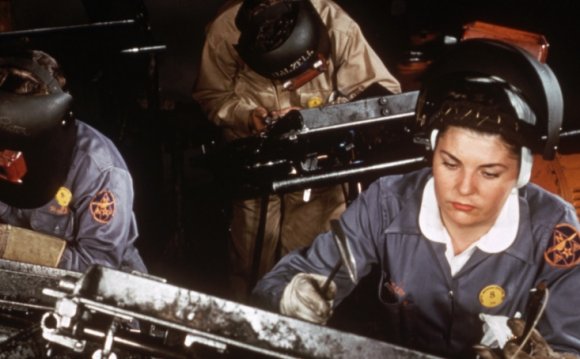 Walladah Bint Mustakfi (c. 1001-1080) - Poet. Walladah was a poet and the free spirited daughter of a Caliph. She lived in Cordoba, Spain, during its most sophisticated and tolerant period. In contrast to Christian Europe, Cordoba under the Moors housed one of the great libraries of the world. At one time it included scholarly women on its staff. In this relaxed atmosphere where women went about unveiled, Walladah was free to give mixed sex parties where she read her quite bold poetry. Economically independent and beholding to no one, Walladah had lovers but never married, which illustrates the nature of the tolerant society into which she was born. Only a few lines of Wallada's poetry remain. Yet she is considered one of the three most important female poets of the era. "My lover I offer the curve of my cheek/ And my kiss to whoever desires it."
(Walladah is one of the personalities featured in Women in the Muslim World.)

Asma (?-1074 or 1087) - Queen. Asma, wife of Ali al-Sulayhi, the founder of Fatimid rule in Yemen, was a powerful woman in her time. The Fatimids were leaders of the Ismaili Shiite movement devoted to the regeneration of the entire Muslim world. Since they in general believed in the equal education of boys and girls and in the active involvement of women in political life, Ali entrusted much of the management of his realm to his queen. Asma attended councils with her face uncovered (unveiled), and had her name as well as her husband's proclaimed from the pulpits of the mosques. Commentaries about her mentioned her intelligence and literary knowledge and her acts of patronage toward poets.

Queen Asma made sure that both her son and Arwa, her future daughter-in-law who was raised in her court, learned the skills necessary to rule. This was one reason why Arwa became celebrated as a wise and strong leader when it was her turn to become queen. In 1066, Ali was killed during their pilgrimage to Mecca. Asma was kidnapped and spent a year in prison before her son managed to rescue her. When he fell ill, she took over management of Yemen until her death, after which his wife, Queen Arwa, assumed the role of queen. (the rule of Queen Arwa is featured in Women in the Muslim World).

Theophano (965 - 997) - Byzantine Princess and Saxon Empress. Theophano was a Byzantine princess who at the age of seventeen was given to the young Saxon emperor Otto II. Though elegant and a delicate beauty, she was high-spirited and a superb politician who brought with her an intimate knowledge of the intricacies of court life. When her husband died, leaving her with a three year old son, she took the title "Imperator Augustus" and defended the child's title for seven years from those who challenged him. She was called by a contemporary "a woman of discreet and firm character...with truly masculine strength." At her death in her early thirties, her mother-in-law Adelaide took over her duties.

Zoe, (1045-1055) - Empress. Zoe more than once took upon herself the role of emperor maker. She was accused of murdering her first husband, Romanus III, in order to marry Michael, a leading political figure, so she could place him upon the throne. Then she replaced Michael with her third and last husband, Constantine IX Monomachus. After his death in 1055, she ruled jointly with her sister Theodora for a year. Theodora, the last of the Macedonian dynasty, ruled independently for twenty months.

For obvious reasons, Zoe was seen by her contemporaries as ruthless and pleasure loving. She was called unnatural by those who thought it shameful that a woman should rule the empire. In truth, Zoe's rule weakened the empire. She did little to lessen the enormous government civil service, and permitted the civilian aristocracy to gain control of the governmental machine. When not at her ritual laden court, she apparently spent much time in her bedroom, making perfume of various blends. That she was strong willed there is little doubt. She caught the attention of a contemporary Michael Psellus who described her ascension to the throne after the death of her first husband: "Empress Zoe, immediately took control of affairs just as if she were, by divine will, the next inheritor of the throne. But actually she was more concerned to take over power briefly so that she might turn over authority to Michael (her next husband). She summoned Michael and dressed him in robes interwoven with gold thread. Then, placing the imperial crown on his head, she sat him down on the sumptuous throne with herself dressed in similar garb seated next to him. She ordered everyone who was living in the palace at this time to...acclaim them both together. And they did so."
(Chronographie in Byzantium, Church, Society and Civilization Seen through Contemporary Eyes, Deno Geanakoplos, University of Chicago Press, 1984.)

Lady Murasaki Shikibu (978-1030) - Writer. Lady Murasaki wrote the world's first epic novel, The Tale of the Genjii. She lived during Japan's brilliant Heian Period (950-1050), a time when aristocratic women enjoyed a number of privileges. At court, for example, women were expected to be as well read as were men; both would take part in poetry contests where they tested each other's wit and cleverness. Poems were also a way men and women communicated with each other. (For much more, )
Murasaki Shikibu is also featured in the unit .

Li-Ch'ing-Chao (or Li Qingzhao), 1084-c. 1151 - Writer and Art Collector. Li-Ch'ing was a scholarly writer, painter, and art collector of great note, specializing in bronze and stone inscriptions. As a woman who was forced by war to become a refugee, her poetry and writings range from the political upheavals of China during the early years of the Sung Dynasty to musings about her personal feelings.