Women in the Past 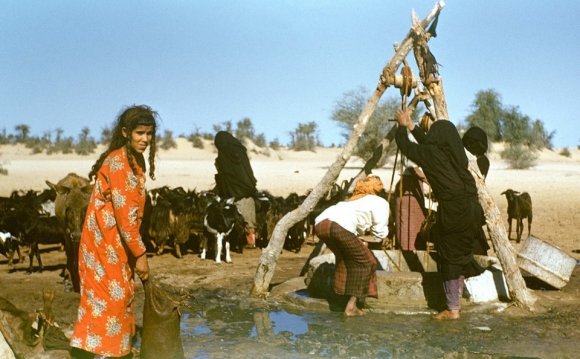 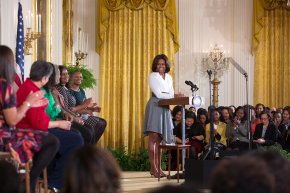 First Lady Michelle Obama delivers remarks at "Celebrating Women of the Movement, " an event honoring Black History Month, in the East Room of the White House, Feb. 20, 2015. The First Lady introduces moderator Vanessa De Luca, Editor-in-Chief of Essence magazine and the panel of intergenerational women who have played a pivotal role in the civil rights movement – both past and present. (Official White House Photo by Amanda Lucidon)

In 1957, Carlotta Walls, a 14-year-old African American girl living in Little Rock, Arkansas, elected to attend Little Rock Central High School. One of the nine students who desegregated the school, Carlotta was subjected to constant bullying, physical abuse, and violent attacks - her parents' home was bombed in February of 1960. Shortly after, she earned her high school diploma.

In 1961, Charlayne Hunter became the first African American woman to attend the University of Georgia. Enduring everyday bigotry and racial slurs, and bottles and bricks thrown at her windows, Charlayne went on to get her degree - which has since propelled her to a successful career as a journalist with NPR, PBS, CNN, and the New York Times.

These are just two of the influential women that took part in a special panel discussion this afternoon at the White House in celebration of Black History Month.

Moderated by Essence Editor-in-Chief Vanessa De Luca, the panel brought together the following five women who have played critical roles in America's progress on civil rights:

As First Lady Michelle Obama said in her introductory remarks, what connects each of these panelists' stories is a "hunger for and belief in the power of education."

Every woman on this stage graduated from college. And some of them did it at tremendous risk to themselves and to their families.

"Thanks to their sacrifice, " she said, "there are no angry mobs gathering outside our schools. Nobody needs a military escort to get to class." But the First Lady also explained that too many of our children still face struggles related to education, and detailed the work that remains:

So today, too many of the opportunities that these women fought for are going unrealized.

"In the end, " she said, "if we really want to solve issues like mass incarceration, poverty, racial profiling, voting rights, and the kinds of challenges that shocked so many of us over the past year, then we simply cannot afford to lose out on the potential of even one young person. We cannot allow even one more young person to fall through the cracks."

Cappella Nova & Women\u2019s Chorus: Inspired by the Past