Most Powerful Women in the world 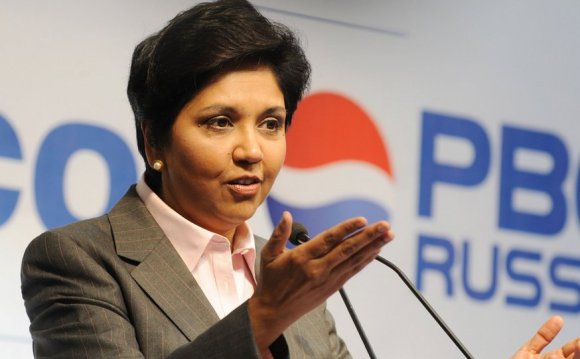 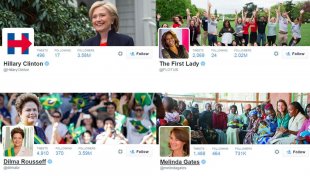 This week Forbes published their annual list of the most powerful women in the world with globally renowned figures like Germany’s Chancellor Angela Merkel and Federal Reserve Chief Janet Yellen featuring high on the list. Here at Talkwalker, we’ve previously looked at the online presence of the tycoons at the top of the Forbes Billionaires List and compared the most powerful women to the most powerful men, but this time we thought we’d do something slightly different. On top of using social listening to compare the online presence of the world’s most powerful women, we also examined their social media activity to see how these global movers and shakers use social to spread their messages to millions of people around the world.

All statistics are from the last 30 days and over 2 million online posts were monitored across a wide variety of online media channels including social networks, online news, blogs and forums.

First, let’s take a look at the overall numbers before diving into what can be learned from the social activity of these women.

Here are the 10 most powerful women in the world ranked by number of online mentions: 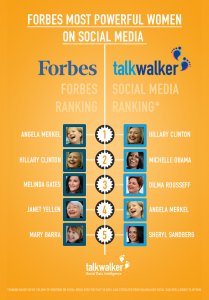 The stand out figure here is that of Hillary Clinton who has over double the mentions of her closest competitor over the last 30 days.

The 5 accounts that had the largest amount of audience activity (mentions, retweets and replies) were:

Here again, Clinton is the clear leader and we can see that almost half of Clinton’s online mentions are coming from activity around her Twitter feed.

It’s clear that at least in terms of using Twitter, Hilary Clinton stands out from the crowd although Michelle Obama’s level of activity is also impressive. The next section will look at how the most active tweeters – Hillary Clinton, Michelle Obama, Dilma Rousseff, Melinda Gates – use Twitter and see if there are any social media lessons to be learned for both those in similar positions of power and for the general public. 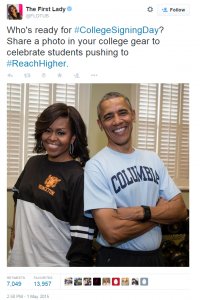 Of the most shared tweets posted by the women listed, Hillary Clinton dominates but more specifically it is a certain type of tweet from Clinton that gets the most attention:

While there are several aspects of these tweets that are powerful, one aspect that really seems to push up the engagement rate is personalization. By signing the tweet, it’s clear to see that Clinton herself has written the tweet and in fact four of the five most shared tweets by Hillary Clinton over the last month include her signature. With the public increasingly savvy to the fact that many social accounts are not run by the supposed account holders themselves, signing tweets gives an extra layer of legitimacy to these posts. 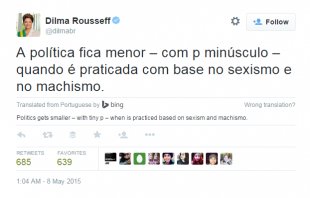 Ok so the photo doesn’t necessarily have to be a selfie, but by including photos of herself in posts, engagement rates increased for the First Lady in particular. The photo above and a video of Michelle Obama during her exercise regimen generating the most engagement of all her tweets this month. Of course, if your husband happens to the President of the United States, there’s no harm in including him in the picture too.

There may be an instinct to shy away from bold statements as a public figure, especially given the propensity for Twitter trolls to deliver abuse, but if delivered well, bold statements can have a big impact. Dilma Rousseff, the current President of Brazil, has plenty to lose but doesn’t shy away from using Twitter to present her opinions and by doing so she gives people the opportunity to accept or reject her views in public. Courage is generally a valued trait and being brave enough to tweet your opinion is one way to show it.

Humour is always a great way to get people’s attention but when you are a public figure, a bit of light-heartedness can go a long way to humanizing people that may seem larger than life. Putting on a red nose isn’t exactly revolutionary, but when you are perhaps the most influential couple in the business world, it helps to bring you a bit closer to your audience.

By using social channels effectively, the most powerful women in the world have been able to let the public know about their opinions on key issues and highlight the causes they care about. Of course, this can sometimes lead to negativity, but generally, the positives seem to outweigh the negatives, as evidenced by the fact that the majority of world’s most powerful women do actually have Twitter feeds.

So for any public figures sitting on the fence, perhaps the example of these powerful women can persuade you to not be afraid and be social.

Angela Merkel The Most Powerful Women in The World | Girl Tube