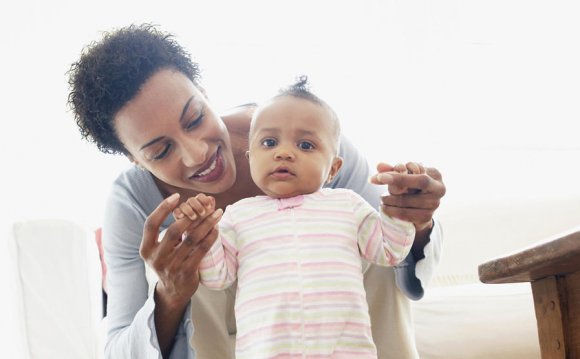 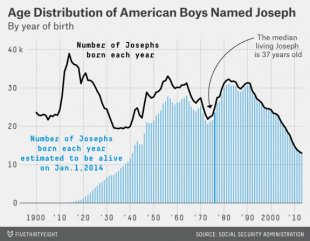 Picture Mildred, Agnes, Ethel and Blanche. Perhaps you imagine the Golden Girls or your grandmother’s poker game. These are names for women of age, wisdom and distinction. The median living Mildred in the United States is now 78 years old.

Now imagine Madison, Sydney, Alexa and Hailey. They sound like the starting midfield on a fourth-grade girls’ soccer team. And they might as well be: the median American females with these names are between 9 and 12 years old.

There are quite a lot of websites devoted to tracking the popularity of American baby names over time. (The data ultimately comes from the Social Security Administration, which records birth names dating back to 1880.) But we haven’t seen anyone ask the age of living Americans with a given name. 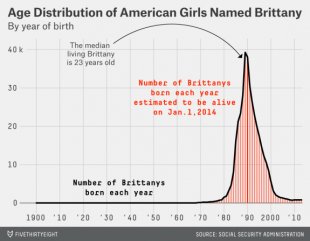 Below, for example, is a chart of Josephs. It shows how many American boys named Joseph were born in each year since 1900. And it shows how many of them are still alive today, assuming that Josephs die at the same rate as other American males. 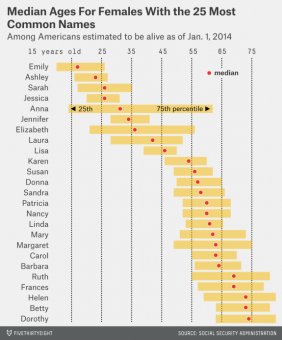 Joseph has been one of the most enduring American names; it’s never gone out of fashion. So knowing that a man is named Joseph doesn’t tell you very much about his age. The median living Joseph is 37 years old, and the interquartile range (that is, the range spanning the 25th through 75th percentiles) runs from 21 to 56. 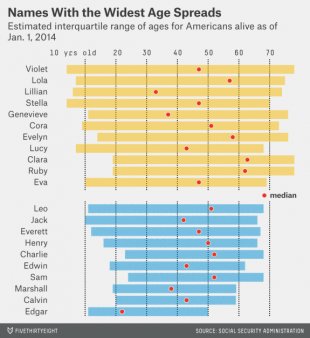 In other words, a quarter of living Josephs are older than 56 and a quarter are younger than 21; the rest are somewhere in between. Not very helpful.

By contrast, you can make much stronger inferences about a woman named Brittany. That name was very popular from the mid-1980s through the mid-1990s, but it wasn’t all that common before and hasn’t been since. If you know a Brittany, she is probably of college age or just a bit older. Half of living American Brittanys are between the ages of 19 and 25.

We can run these calculations for any name in the SSA’s database — for instance, for the 25 most popular male names since 1900. Joshuas, Andrews and Matthews are the youngest of these, with median ages of 22, 24 and 26. Georges and Donalds are the oldest, each with a median age of 59.