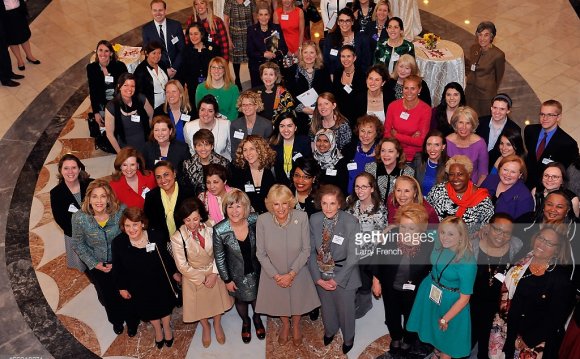 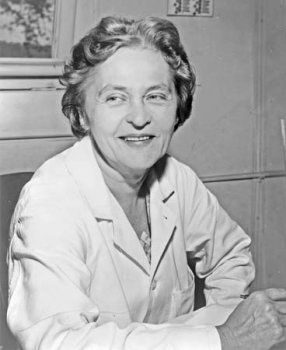 Ida Noddack, a German chemist, codiscovered the chemical element rhenium and first proposed the idea of nuclear fission. According to Britannica:
In 1934 Italian physicist Enrico Fermi claimed possible production of atomic elements heavier than uranium (or transuranium elements) after bombardment of uranium with neutrons. However, in a paper on Fermi’s discovery, Noddack noted in passing that the bombardment of uranium could have actually produced smaller nuclei. Her suggestion was the first proposal of the concept of nuclear fission. However, it was ignored at the time because it entailed such a broad departure from the accepted views of nuclear physics and was unsupported by clear chemical evidence. In 1938 German chemists Otto Hahn and Fritz Strassmann showed that the uranium had indeed split apart into lighter elements and that fission was possible. In 1939 Noddack asserted her prior discovery of nuclear fission. Hahn and Strassmann refused to answer Noddack’s charges.

Bryn Mawr College Archives German mathematician Emmy Noether was known for her innovations in higher algebra, which gained her recognition as the most creative abstract algebraist of modern times. Noether earned a Ph.D. in 1907, having focused her dissertation work on algebraic invariants. In 1915, while working at the University of Göttingen, her mathematical intuition was recognized by David Hilbert and Felix Klein, both of whom profoundly influenced the foundations of mathematics and who urged her to remain at Göttingen. Britannica notes:
The extent and significance of her work cannot be accurately judged from her papers. Much of her work appeared in the publications of students and colleagues; many times a suggestion or even a casual remark revealed her great insight and stimulated another to complete and perfect some idea.

American medical researcher and health educator Mathilde Krim was known for her determined work in combating AIDS and HIV through research and education. Among her most lasting contributions to the fight against AIDS was her establishment of the AIDS Medical Foundation in 1983, which later merged with a similar organization to form the American Foundation for AIDS Research (AmFAR). Krim received the Presidential Medal of Freedom in 2000.

New York World Telegram and the Sun Newspaper—Al Ravenna/Library of Congress, Washington, D.C. (neg. no. LC-USZ62-113268) Mária Telkes, a Hungarian-born American physical chemist and biophysicist, was known for her invention of the solar distiller and of the first solar-powered heating system designed for use in the home. After immigrating to the United States in the mid-1920s, she conducted research in biophysics at the Cleveland Clinic Foundation and later became a research engineer at Westinghouse Electric. During World War II, while working for the U.S. Office of Scientific Research and Development, she created a solar distiller that vaporized seawater and recondensed it into potable water. In 1948 her design for the world’s first home heating system based on the capture of solar energy came to fruition with the construction of a house in Dover, Massachusetts, that made use of solar collectors and Glauber’s salts for heat storage.

British-born American astronomer Cecilia Payne-Gaposchkin discovered that stars are made mainly of hydrogen and helium and established that stars could be classified according to their temperatures. As Britannica relates:
In her Ph.D. thesis (published as Stellar Atmospheres [1925]), Payne used the spectral lines of many different elements and the work of Indian astrophysicist Meghnad Saha, who had discovered an equation relating the ionization states of an element in a star to the temperature to definitively establish that the spectral sequence did correspond to quantifiable stellar temperatures. Payne also determined that stars are composed mostly of hydrogen and helium. However, she was dissuaded from this conclusion by astronomer Henry Norris Russell, who thought that stars would have the same composition as Earth. (Russell conceded in 1929 that Payne was correct.) Payne received the first Ph.D. in astronomy from Radcliffe College for her thesis, since Harvard did not grant doctoral degrees to women. Astronomers Otto Struve and Velta Zebergs later called her thesis “undoubtedly the most brilliant Ph.D. thesis ever written in astronomy.”

English nutritionist Elsie Widdowson, in collaboration with her longtime research partner, Robert A. McCance, guided the British government’s World War II food-rationing program. Widdowson attended Imperial College, London, where she received bachelor’s and doctoral degrees in chemistry. She met McCance in the 1930s while studying dietetics at King’s College of Household and Social Science. The two investigated the nutritional content of numerous types of food and published their findings in 1940 in The Chemical Composition of Foods, a work that became fundamental in the study of nutrition. At the outbreak of World War II, Widdowson and McCance embarked on a series of studies on the effects of dietary deprivation, which culminated in the conclusion that a diet consisting of potatoes, bread, and cabbage fulfilled basic nutritional requirements. They later advocated the fortification of foods with nutrients such as vitamins.

Courtesy of the Bruntsfield Hospital, Edinburgh In the late 19th century, British physician Sophia Louisa Jex-Blake successfully sought legislation permitting women in Britain to receive a medical degree and a license to practice medicine and surgery. Jex-Blake’s own studies are in part a reflection of the circuitous route women were forced to take as a result of being denied the opportunity to receive medical degrees. She first studied at Queen’s College, London, and later in Boston and New York and at the University of Edinburgh, where she was denied a degree in medicine. She finally earned a medical degree from the University of Bern and was granted a license to practice by the King’s and Queen’s College of Physicians, Dublin.

Library of Congress, Washington, D.C. (neg. no. LC USZ 62 58747) Florence Rena Sabin was an American anatomist and investigator known for her research on the lymphatic system and who was considered to be one of the leading women scientists of the United States. In 1917 she became the first female full professor at John’s Hopkins University, and in 1925 she joined the Rockefeller Institute for Medical Research (now Rockefeller University) and was elected to the National Academy of Sciences, in both instances becoming the first woman to received these honors. Her work An Atlas of the Medulla and Midbrain (1901) was a popular medical text, and her demonstration that lymphatic vessels develop from a distinct cell layer in certain fetal veins led to her recognition as a top-notch researcher.

British biochemist Muriel Wheldale Onslow was known for her study of the inheritance of flower color in the common snapdragon (Antirrhinum majus), which contributed to the foundation of modern genetics. While at the Balfour Biological Laboratory for Women at the University of Cambridge, she worked with William Bateson, a biologist who in 1900 had rediscovered a paper on plant hybrids written by Gregor Mendel. From her experiments with crossing plants of different flower color, Wheldale demonstrated that traits are inherited by offspring in specific proportions, thereby affirming the theory of Mendelian inheritance. She reported her landmark findings in 1907 in a paper titled “The Inheritance of Flower Colour in Antirrhinum majus.” Wheldale also conducted insightful research on the biochemistry of pigment molecules in plants.